Pind Daan poojan is being performed over the bank of Ganga at Brij Ghat in Garh Mukteshwar by the purohits/pandas. Book your priest online to perform Pind daan in the disguise of your ancestors in Mukteshwar.

Note:- The pooja will be conducted at Braj Ghat in Garh Mukteshwar.

Garh Mukteshwar also known as Mukti-dham has great importance of Pind Daan & ancestors rituals at Brij Ghat. Here, pind daan and other ancestors rituals is being performed by the teerth purohits over the ghat. It is believed that performing the rituals here would leads the departed soul to heaven. 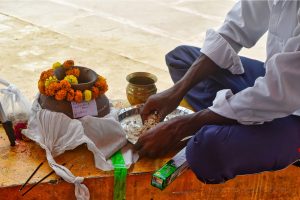 History of Pind Daan in Mukteshwar:-

After the Pandavas won against the Kauravas in the battle of Mahabharata. It is their rite to conduct Pind Daan as  to provide moksha to the soul of Kauravas & is the reason Lord Krishna urged Pandavas to conduct the rituals.

Pandavas conducted Pind Daan of Kauravas at the bank Ganga in Mukteshwar and after that this place has received religious importance of conducting the Pind Daan at Garh Ganga.

This site uses Akismet to reduce spam. Learn how your comment data is processed.