Mathura, one of the ancient city in Uttar Pradesh. The pind daan is performed here in Gokul ( a place in Mathura).

Prayag Pandits provides the best and knowledgable teerth purohit in Mathura to conduct the pind daan poojan here. For online and offline poojan, please contact us to arrange the poojan in Mathura.

Mathura, one of the seven sacred place according to Hindu Mythology. Vrindavan situated 11 kms from Mathura is the birth place of Lord Krishna. The city has great religious importance in terms of rituals & Karmkand.

Mathura is also considered as the city of Moksha (salvation) and people from different part of India visit Mathura for performing Pind Daan to their ancestors. 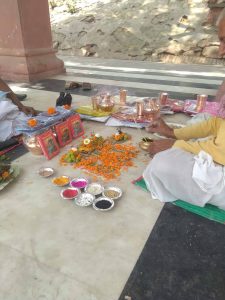 In Mathura, online pind daan is performed at the Vishranti tirth, Bodhini tirth or Vayu tirth on the banks of the Yamuna river. Seven Pinds or balls of rice mixed with wheat flour, honey and milk are prepared as offerings to the soul of the deceased and the ancestors and these are offered to the chanting of mantras. It is the moral duty of each Hindu to honor dead family members and conduct the Pind Daan in order to free the soul and give it peace.